The elective system, whereby Calvin's God abdicated in favor of Democracy's child, was born in Jefferson's university. The difficulty at "the University 7 ' was not with the elective system, but with the whole combination of new theories and old human facts. The European teachers were not used to conducting classes over which they had no disciplinary power. The young men who could take advantage of free higher education were of course the sons of the well-to-do, and Poe and his classmates were boys, with a different idea of honour from that of old men. 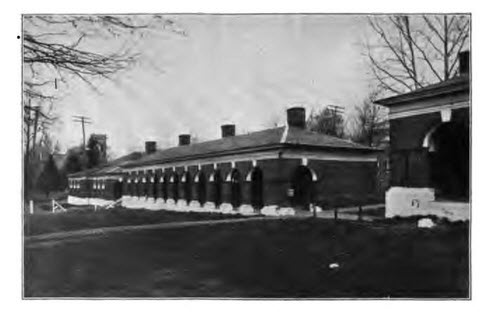 University of Virginia, Where Poe Attended

Poe elected "ancient and modern languages. " He had no difficulty in keeping up his class record. He showed his aptitude in things linguistic, and browsed among the books in the library. Once when the instructor in Italian suggested as optional work a translation from a passage of Tasso, Poe was the only one in the class to respond, and he was commended for his rendering.

Poe never fell under faculty censure or did anything to distinguish him from his fellows in point of wildness or disobedience. When the Board of Visitors appealed to the civil authorities to bring discipline into the young educational democracy and a sheriff appeared with writs for the gaming students, Poe was only one of many who bolted. Like his companions, he gambled and drank. It was the gambling which was his immediate undoing. Mr. Allan refused to pay his gaming debts, and on the 15th of December, 1826, after ten months in the university, Poe ended his academic schooling. He stood his final examinations with credit: the examinations in any American college of that time must have been easy for a clever boy to stand.

In the university he encountered the dangers of alcohol, not because he was in college or because he was in this particular college, but because he lived in a civilized community and was eighteen years old. He must needs learn at this time-and, being what he was, he could not learn wisely-his physiological incapacity for alcohol.

Most that has been written of Poe's encounters with the demon rum has been based upon ignorance of the demon, or upon insufficient knowledge of Poe, or upon an elaborate pseudo-psychology which is current in France, whereby Poe is represented as dipping his pen in a pot of alcohol, his fine poems are explained as neurological phenomena, and he is made spirituous forefather of all absinthe poetry. Poe is an exotic ; he is strangely un-American; he is what we Anglo-Saxons think of as "Frenchy." His work has enjoyed the refinements of French criticism and the literary sincerity of a great French translator, and we have by intellectual compulsion yielded him to France. But the French have not interpreted the man as he lived in these United States.